Hey Guys, so yesterday with the great weather in NYC I decided to take a detour from going home in Queens and headed down to SOHO to Michael K for the Walter "Cyde" Frazier Event. SOHO on a Friday X Nice Weather = CROWDED! But it was worth it. I got to shake hands with a legend, listen to dope beats by DJ MONI, see hot kicks...what better way to start the weekend!

First I got there and the "Clyde Girls" were outside dragging heads off the street in the store. These girls had the 70s PUMA look going on! 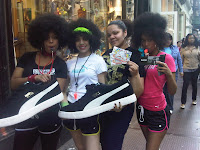 So you know I sneaked in there and grabbed a shot with them! Reppin FSF!

I chilled and mingled for about an hour or so. Took some pics at the PUMA photo booth holding the GIANT CLYDE SNEAKER! (That I actually got Mr. Frazier to sign himself!!!) 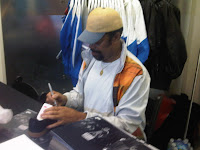 He was a very nice man, and it was a honor to meet him and tell him how much I loved the Clydes, and even though I'm a youngin...lol...I heard my Dad's stories of him! I got an autographed poster as well that is going up on the wall.

He came to the event in his Rolls Royce...I heard he collects cars and this is one of them: 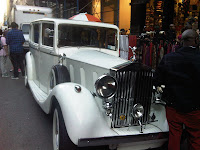 So I came, I saw, and bombed the girls in the spot with FSF flyers!

Also Mr. Frazier is the NY Knicks commentator now so you can hear him at every Knicks Game!

And you know he was rocking some orange Clydes which I got a quick shot of as he was signing autographs! Don't you love em Lori? LOL 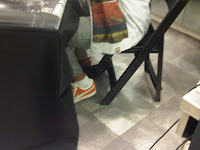