Is this really a good deed? 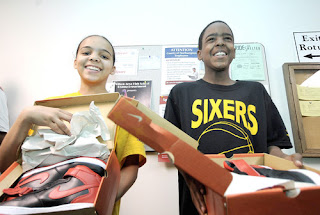 The Nike sneakers bore former Chicago Bulls superstar Michael Jordan's iconic number 23. They had the signature swoosh and the famous silhouette of a Jordan dunk on their tongue.

There's a secret about them, though, if you lean closer and promise to keep a tight lip.

Don't tell anyone, but they're knockoffs, fakes seized last year by Easton police during a raid on a business dealing counterfeit goods.

On Wednesday, that didn't matter to youths who scrambled to find their sizes as parents and officials from local Boys and Girls and other youth clubs looked on in a hall of the Northampton County Courthouse.

Related links
John Morganelli Photo The kicks -- roughly 400 pairs of them valued at more than $13,000 -- are being donated to youngsters who need them, care of a court order and efforts by District Attorney John Morganelli's office.

''It's good what they're doing,'' said Kasson Thomas,14, who attends Easton Area High School and plays basketball for the Boys and Girls Club of Easton. The shoes are ''looking better than the real ones.''

Morganelli announced the kickoff of the Sneakers for Kids Program, which will pair youths in after-school and other programs with what look to all intents and purposes like real deal Nikes.

It was the arrest of Jonathan K. Washington Jr., 34, for selling counterfeits at Bling Bling Fashions on Northampton Street in Easton that prompted the idea, Morganelli said.

As part of a plea bargain, Washington agreed to forfeit all of his shoes, in exchange for the charges being dropped, according to court records. Washington also pleaded guilty to a misdemeanor for selling counterfeit CDs and DVDs in 2005. He received a $300 fine and six months of probation on that charge, with those items ordered destroyed.

When the deal was in front of Judge Stephen Baratta in February, he complained it was a shame the sneakers would also be tossed, Morganelli said. That culminated in an order by Baratta on Monday that the shoes be donated to nonprofit organizations.

''We had a choice between destroying all these shoes or giving them to kidsÂ…whose families perhaps couldn't afford to buy them,'' Morganelli said.

Many details of the program have yet to be worked out. Beyond Boys and Girls clubs, groups such as The Children's Home of Easton, the Bethlehem Housing Authority and the Salvation Army of Allentown are also involved.

The Boys and Girls Club of Easton is managing efforts. Initially, kids are signing up from the Lehigh Valley Teen Basketball League, which involves 10 teams of potentially at-risk teens from the various organizations.

Pairs of shoes will also be awarded during youth basketball contests that are being planned later this year, said Dean Young, the executive director of the Boys and Girls Club of Easton.

Linda Mitchell watched as her 11-year-old son Hassan Greenfield picked out a pair of black and red Nikes. He has been playing basketball since he was 5 -- a lot of pairs of shoes to go through, she said.

''They look nice,'' said Hassan, a sixth-grader at Easton Area Middle School who was headed to a game Wednesday after classes.

Sneakers can be a status symbol, sometimes leading to theft if they're unaffordable, officials said. But will fake shoes erase the temptation?

Young said they will, especially with kids who often deal with stigma, and learn how to brush it aside.

After all, he said, no one has to go out and advertise that they're wearing fakes.
Full Story Here
Posted by Roc at 9:57 AM