Hello Ladies and Gents!!
Today, CONVERSE Inc. announced the launch of their newest footwear
collaboration with world-famous Gorillaz. Launching in February 2012, the
styles from the collection combine the iconic Chuck Taylor All Star
silhouette with the band's legendary graphic images. Award-winning
designer and Gorillaz co-creator Jamie Hewlett has designed exclusive
prints incorporating elements from their ground breaking artwork.. Each
design melds their diverse backgrounds and unique influences to create a
revolutionary collection. The partnership with Gorillaz will also include
a Converse "Three Artists. One Song" music collaboration that will
coincide with the launch of the collection.
"To converse: the exchange of thoughts, feelings or ideas. That's what
Gorillaz are all about, working and collaborating and exchanging ideas
with other artists and global communicators. We've been trading in ideas
and conversing with one another for ten whole years. So I couldn't think
of a better bunch of people to help celebrate our decade in the business
than the good people over at the Converse shoe company. Plus I've been
wearing my Chuck Taylor's since forever." - Russel Hobbs, drummer of
Gorillaz
Celebrating the 10th anniversary of their self-titled debut album,
Gorillaz are widely recognized for not only creating a new genre of music
but redefining the concept of a band. With a unique sound that brought
together alternative rock, hip hop, electronic and pop music, the band
implemented fresh ideas from their limitless fictional universe and have
sold over 15 million records worldwide to date. In 2006, the band won a
GRAMMY® Award for "Best Pop Collaboration with Vocals", for "Feel Good
Inc" with De La Soul. On November 28th, they will release the long-awaited
"Singles Collection: 2001-2011," a celebration of a decade together.
The Gorillaz collection gives the classic Chuck Taylor All Star silhouette
an edge with four different looks inspired by the band. The military
inspired camouflage print, taken from the cover of their self-titled
debut, is the signature design for the collection and is featured here as
a sneak peek. All shoes from the collection contain a Gorillaz heel tab
and hangtag with additional details on the product. The full Gorillaz
Chuck Taylor All Star collection will be revealed in February 2012 and
available nationwide and globally at select retail stores and online at
www.converse.com. 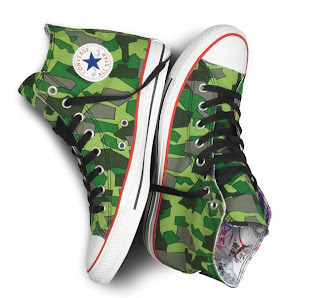 These are definetly worth the cop for the low low price of just $60!! Will these be on anyones Valentines Day Shoe list??
Posted by SnkrDivaMOB at 6:10 PM