Nike recently invited FSF and about 30 other media outlets to view their Spring 2010 women's training line of apparel and sneakers. Not only did we get to see the goods (and work out in them!), but we got to visit some of the 2010 Winter Olympic sites in Vancouver, BC, and meet 8 phenomenal women athletes who are Olympic hopefuls. It was an inspiring trip! (Full disclosure: Nike paid for our entire visit, and we are most grateful! But as always, I call it like I see it.) 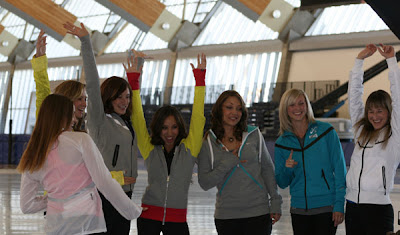 We got to talk with each of the athletes at some length, so I look forward to sharing their perspectives on the challenges and thrills of being serious women athletes, their relationship with Nike and their hopes for the Games. For now, let me share some pics and a few details... 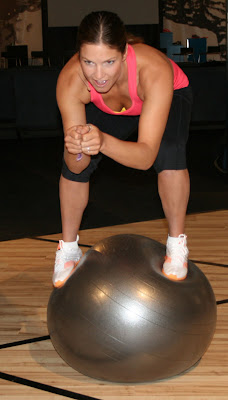 Julia Mancuso, 2006 Olympic Gold Medalist in the giant slalom, showed us some of her summer workout! (And she went up to a standing position and back down, over and over, "great for your core") 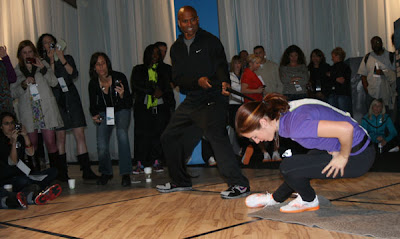 Katherine Reutter, World Cup short track speed skater, demonstrates a resistance workout. (With help from a Nike trainer and lots of us taking pics in the background.) 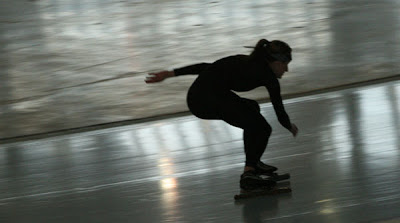 Jennifer Rodriguez, a long-track speed skater, first transfered to the sport from a successful career in inline skating, then medaled twice in Salt Lake City, and is now planning a comeback from retirement. She said she skates so hard in races that her vision is blurry by the end because all her blood has left her brain to go to her limbs! That blew me away. 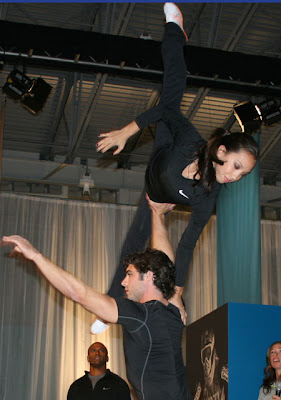 Keauna McLaughlin and pairs skating partner Rockne Brubaker showed us some training moves on land and on ice. They're currently the U.S. National Champions, and she's only 18! She says "I didn't get serious about skating until I was four". Four! 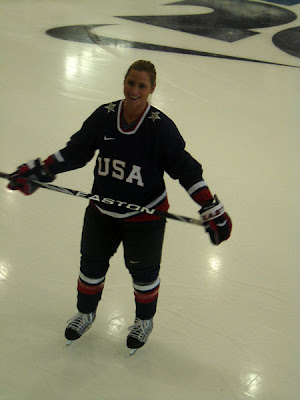 Angela Ruggiero already has Olympic gold, silver and bronze, and she's going to her 4th Olympics to try to get another gold. She's also the first female non-goalie to play professional men's hockey! (On the Tulsa Oilers.) 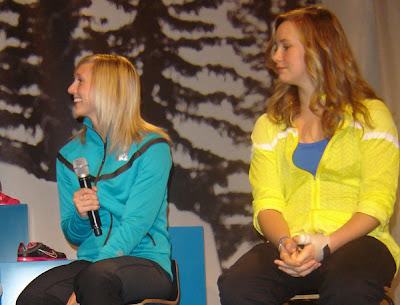 Nicole Joraanstad (left) is a SIX time national champion curler. That's that crazy sport where you kinda bowl a huge thing on the ice and then sweep it to wear it belongs. I WISH we'd gotten a demo on that. She says she has special curling sneakers that have medal on the sole of one foot and not the other (cuz of the strange bowling-type motion). Ellery Hollingsworth, on right, got into snowboarding to prove her brothers wrong (they said she couldn't do it), and now she's hoping to be in her first Olympics after being named "Rookie of the Year" in the U.S. 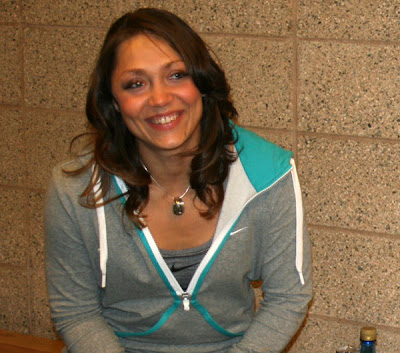 Katie Uhlaender rides down the side of a mountain on the "skeleton" sled at over 100 miles an hour! She calls it "relaxed chaos", but I would not be relaxed at all. Speaking of speed, she medaled in a U.S. event 3 weeks after starting the sport, then went on to win both the U.S. Junior National and National Championships in her first season. Damn!

And many thanks to Fee for most of these photos!
Posted by lori at 9:38 PM